By Unknown Posted on February 11, 2015
I attended my two brothers’ marriage ceremony recently who interestingly married the two sisters from the same family. I have had attend many marriage ceremonies in my life but never observed the customs in marriage ceremony. Few years back I attended one in my own village and got to know few things but I gained more knowledge during the brothers’ time and today I thought of sharing here in my blog. There are much more for me to learn and to see yet. 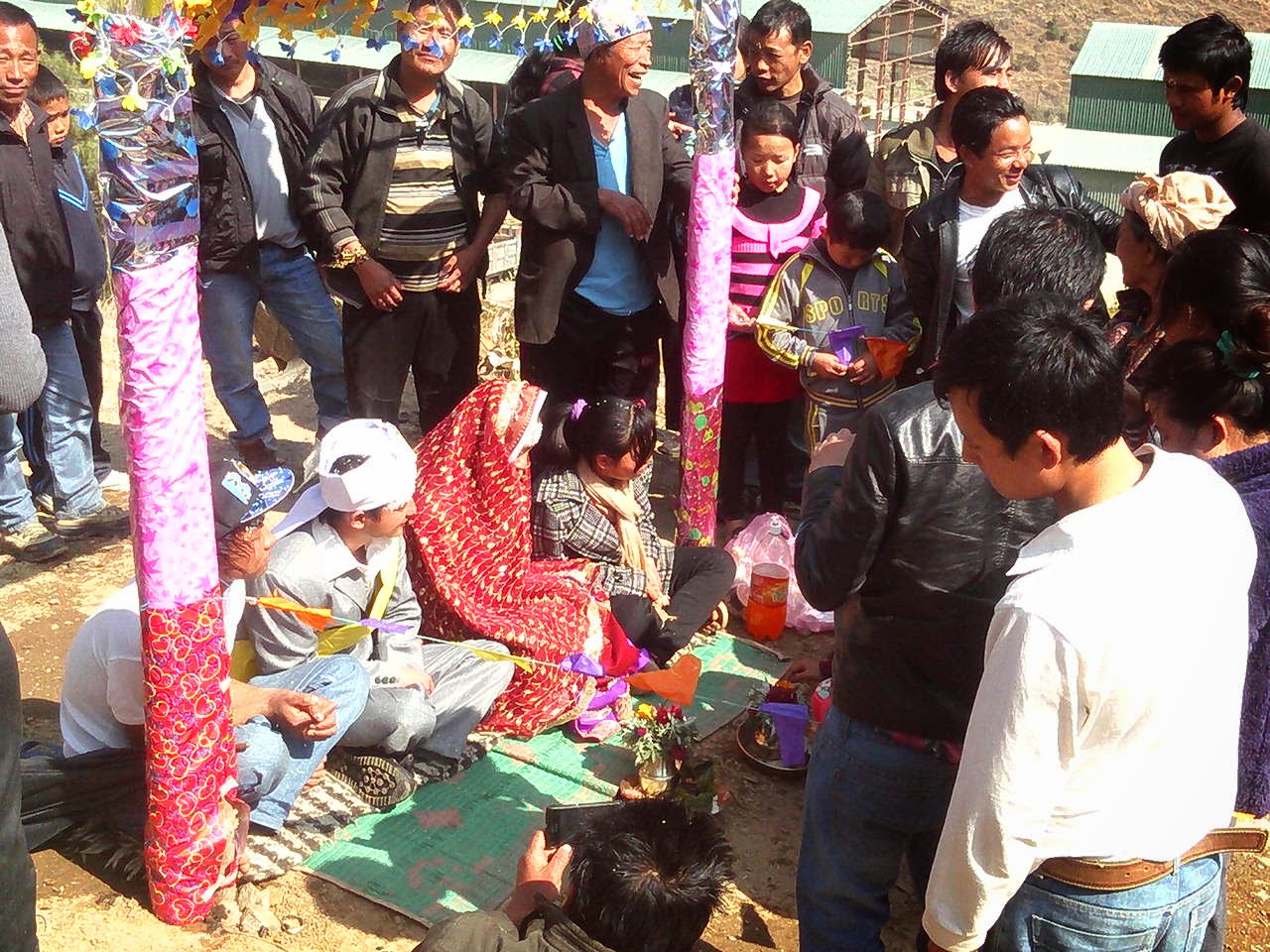 First of all there will be two kongpi(s) one from the grooms’ side and one from the brides’ side who knowing every protocols of marriage ceremony generally they will be elders. They are the main mediators between the grooms and brides family who will be taking all the responsibilities of the ceremony. Rai’s and subbas’ normally kills pig for the ceremony and the pigs head is given to the kongpi as the gratitude for mediating and taking all the responsibilities. The two kongpi(s) will talk to the grooms and brides families and fix the marriage on the specific date following the Sanskrit’s calendar (moon calendar).

The marriage ceremony take place twice, first day at the grooms’ home and ones at the brides’ home on the second day. If the brides home is far from the grooms home then bride will be brought to the grooms home few days ago but during the ceremony bride has to be taken away from the grooms homes main gate which will be taken care by few women were they will dress up the bride with the marriage costume which is sari in our case. When they are ready groom and janti (people from the grooms’ side) has to go to take her home officially. I forgot one thing there will be one boy (unmarried) can be grooms’ younger brother called lokonda from his side and one girl from the brides side which can be again brides little sis called Lokondi as a kind of assistant who ‘ll be helping groom and bride all the time. When the groom goes to take the bride from the brides place, people from the brides side will be throwing the rice(mixed with cud) on the groom and on the janti heavily and Lokonda has to protect the groom with the help of umbrella. It’s a custom and quite interesting. 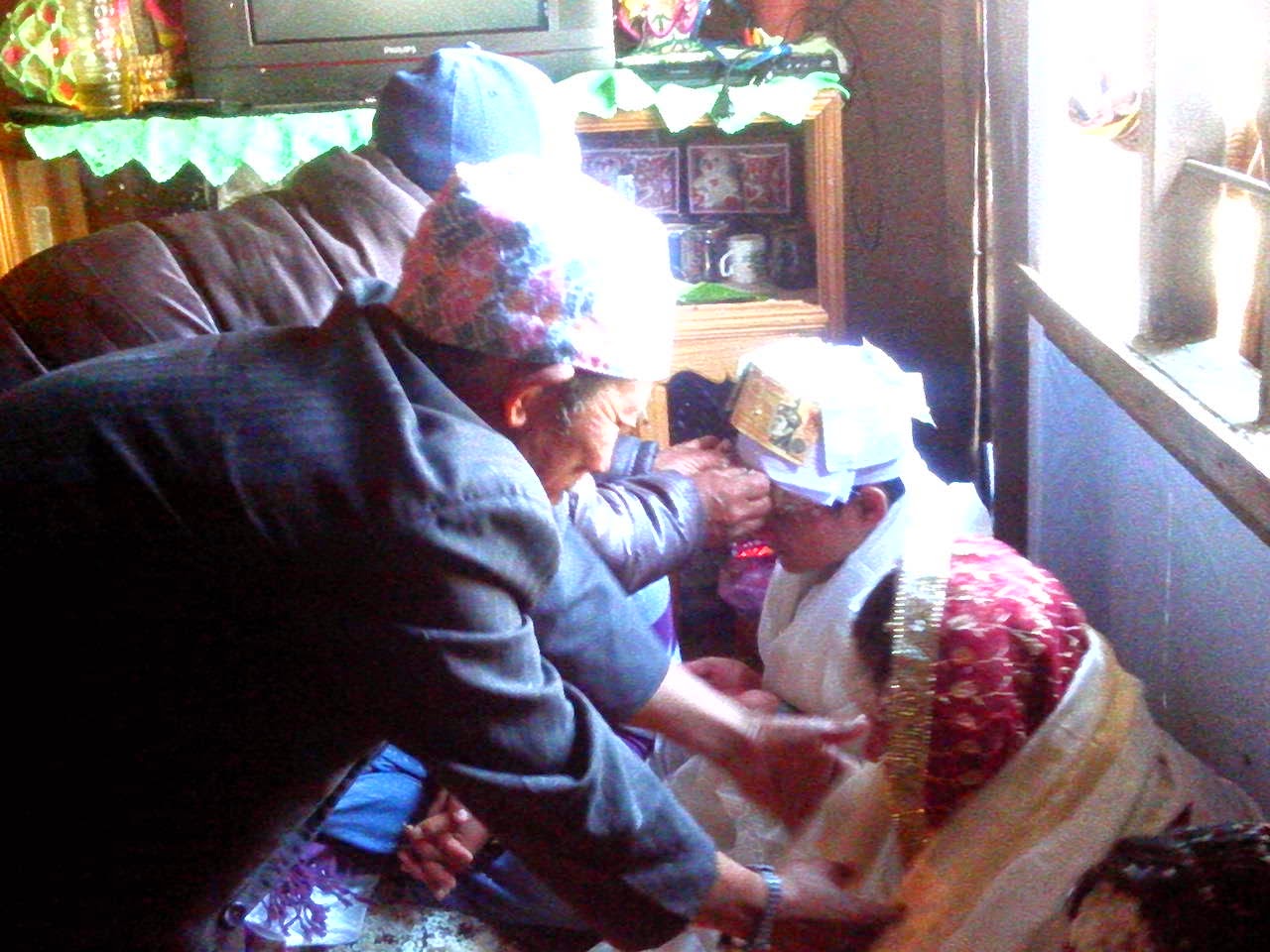 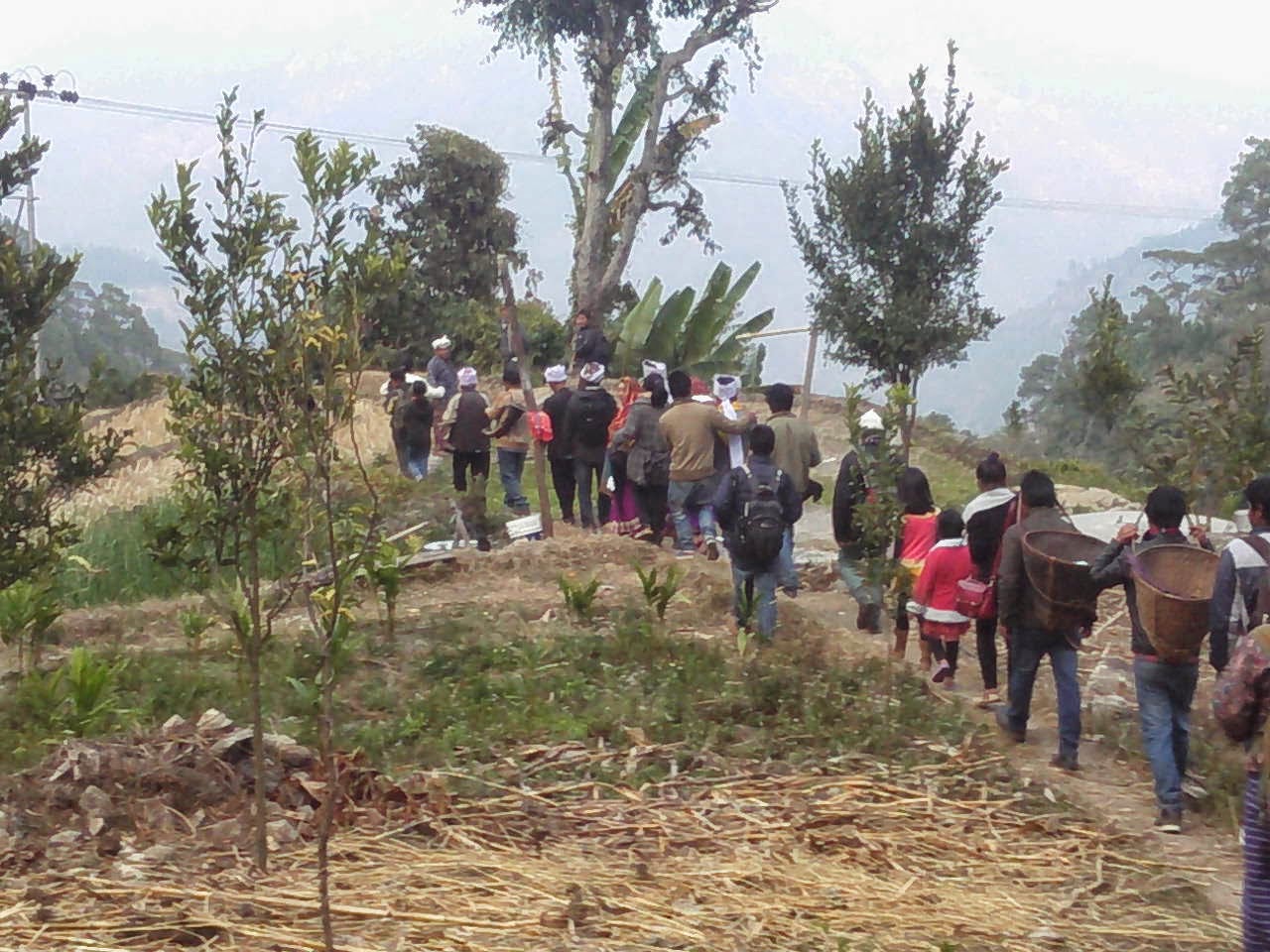 After entering the groom’s home officially then comes the main ceremony the sindur lagan (weeding). Where groom will put sindur(red powder) on the brides mid-top of her forehead signifying that she is his wife forever from then, he will be again putting pootey(mangal sutra) on her neck. Where they have to tell from today he/she is mine J again followed by the tika ceremony and blessing by all the elders and relatives, first by the grandparents followed my parents and other close relatives.

That’s only at the groom’s home; same ceremonies will again happen at the brides’ home the day after that where there will be a mass gathering at the brides’ home the people from the brides society. One thing, during the ceremony at the grooms home, brides’ parents will be not there except her little sis as lokondi. The kongpi from the brides’ side and brides parents will fix a specific time not late then 2pm for the janti from groom’s sides to reach their home and the janti have to reach at that time or before no matter what. Because if janti reaches late at the evening the people and the guest at the brides’ home will be really suffering from the hunger and some guest might even go back without having food. The custom is that before the reach of janti and before serving to janti(groom & bride) no one can eat anything from the main kitchen, not even breakfast. Only after serving to janti, groom and bride, other people and guest can have. So if we (janti) happened to reach late than the given time then we are dead surely. They will not even let us enter their gate and home, forget about the welcome ceremony. The kongpi and brides parents will tell everything(unpleasant lines) that they can without listening to any apologies from the grooms side(kongpi). Mainly the kongpi from the grooms’ side will be dead. They will not even allow the janti to seat and we can’t seat without their command. 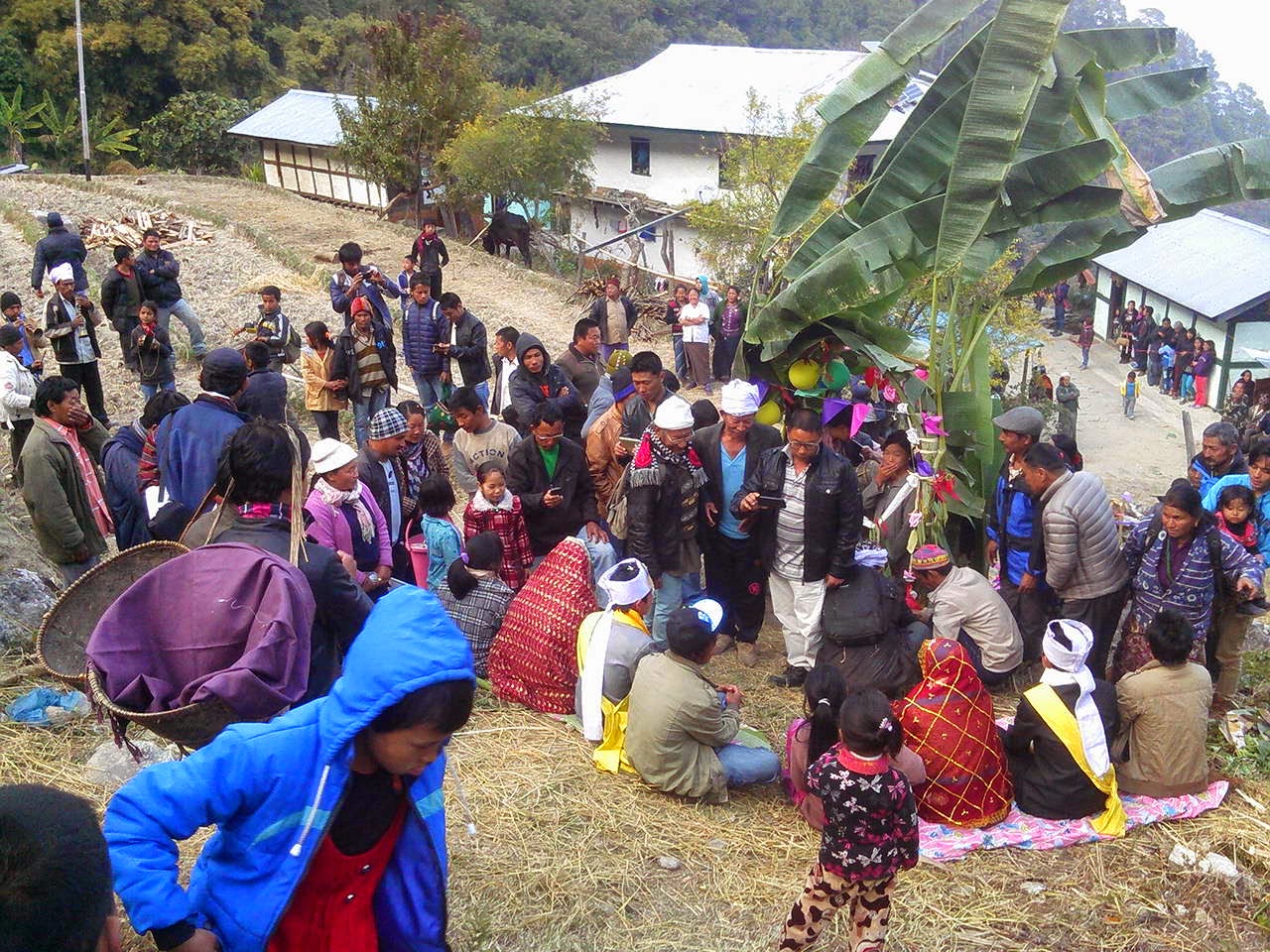 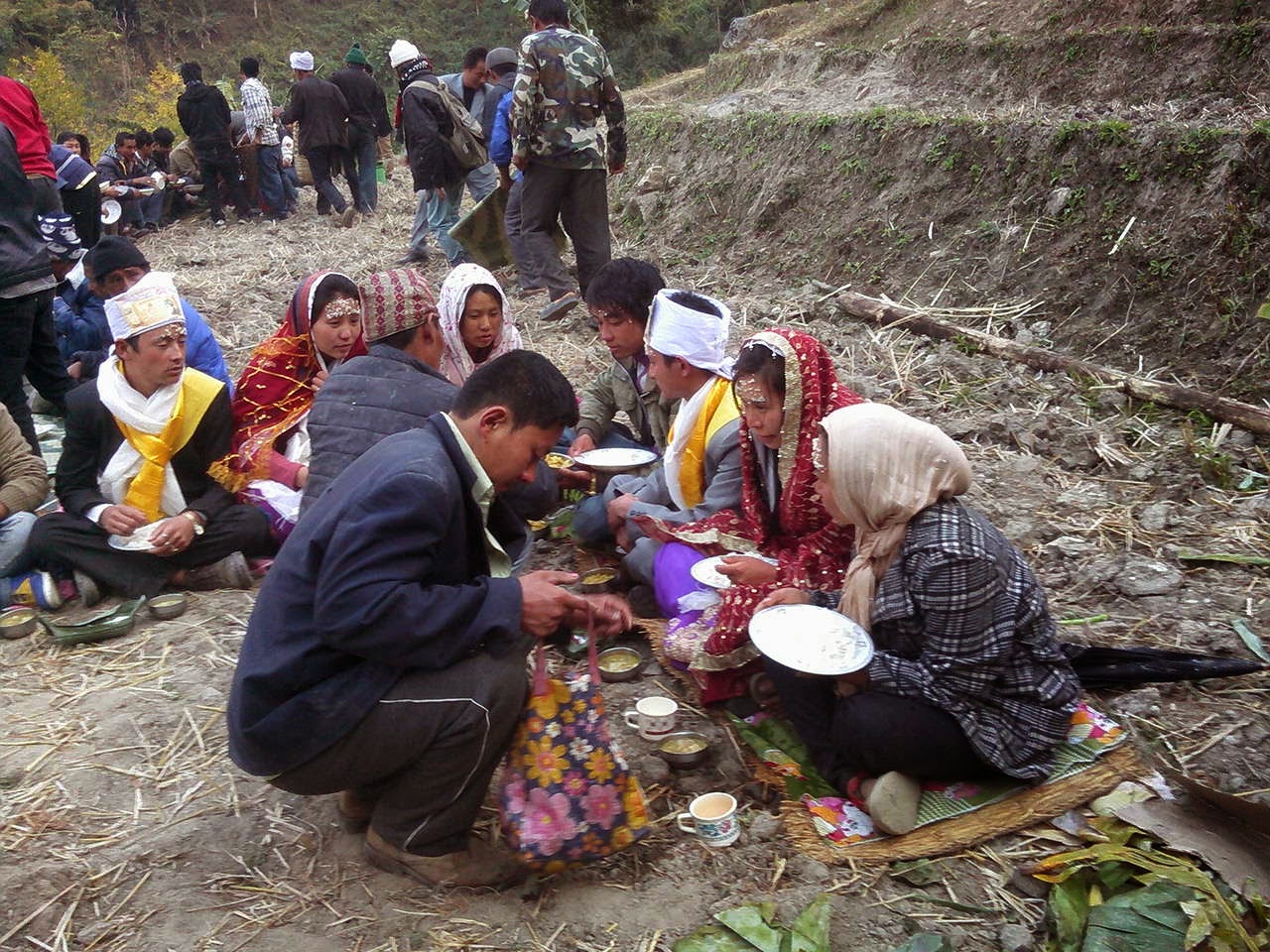 So the timing is really important above all but if we reach at the given time, they will treat us kindly up to their level best starting from the welcome ceremony. They will be waiting us with all the drinks at the main gate and will offer lavishly us. Even there will be tika ceremony at the main gate and after that janti will be asked to go directly to the kitchen for the lunch/dinner because the entire guest will be really in hunger without having any food starting from the morning. After that same programme as in the grooms home will be happening, singing and dancing for the whole night and day after that, again groom, bride and janti will be returning to the grooms’ home taking bride for permanently. So if you are ever thinking of marrying Rai and subba, the above things are really important to remember and may be same for all the other Lhotshampa but I believe ours is quite tough. Much more left to share maybe I can do that latter when I get into this situation(when I marry :) Want to apologize to readers it went quite long.